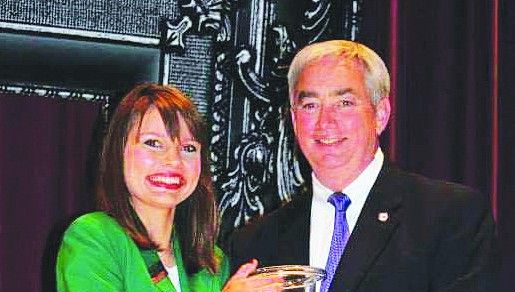 MURFREESBORO – Pike County 4-H is proud to announce Heather Jackson of the Glenwood Caddo River Gems club was the winner of this year’s Arkansas 4-H Hall of Fame award. The presentation of this prestigious award was made last Tuesday evening during the Teen Star and Hall of Fame program at the C.A. Vines Arkansas 4-H Center. There was only one recipient chosen from the entire state and this is the second highest award in 4-H.
The  Hall of Fame originated to recognize truly outstanding 4-H Teen Stars who have achieved at the highest level and who have contributed to making Arkansas 4-H a dynamic and well known organization. She joins Tanyoka Williams, Sydney Steely, and Natalie Jones as Hall of Fame members from the county.
Heather is the 18 year old daughter of Jimmy and Renita Jackson of Caddo Gap. She and her brother, Andy, have been very active in the 4-H program with her mother serving as a volunteer leader in the Caddo River Gems club.  She is currently serving as one of six State 4-H Officers.
Her main project has been leadership with emphasis on educating the public about being prepared for natural disasters. After the tornado in Mena, she saw the need, researched the subject, and developed a plan. She developed two brochures: “Disaster Packs for the Home,” and “Disaster Packs for Camping and Lake Activities.” She has distributed over 8,000 of these brochures and the Corps of Engineers at area lakes are distributing them around their camping areas. She has presented Disaster Awareness programs and workshops to many organizations.
Some people are blessed with the natural ability to influence others. Heather is one of these exceptional individuals. Over the years she has realized her leadership potential and has used it to benefit hundreds of youth and adults in her county, state, and across the country.
Heather will receive $11,500 in 4-H scholarships this year. She was the recipient of the Prudential Spirit of Community award, the Arkansas KARK TV and Department of Volunteerism Youth Humanitarian award, President’s Volunteer Service award. FEMA Region 6 Director’s award, the Adj General of Ark. Army National Guard Recognition of Excellence award, and the Daughters of the American Revolution Citizenship award. Recently she was selected as “Kids Can Change the World” One Year Road Trip – Generation of Generosity – part of a nationwide multi-media documentary project with kid change-makers in all 50 states who are making the world better.
Heather’s future plans are to attend Henderson State University and major in Family and Consumer Science with an education degree.