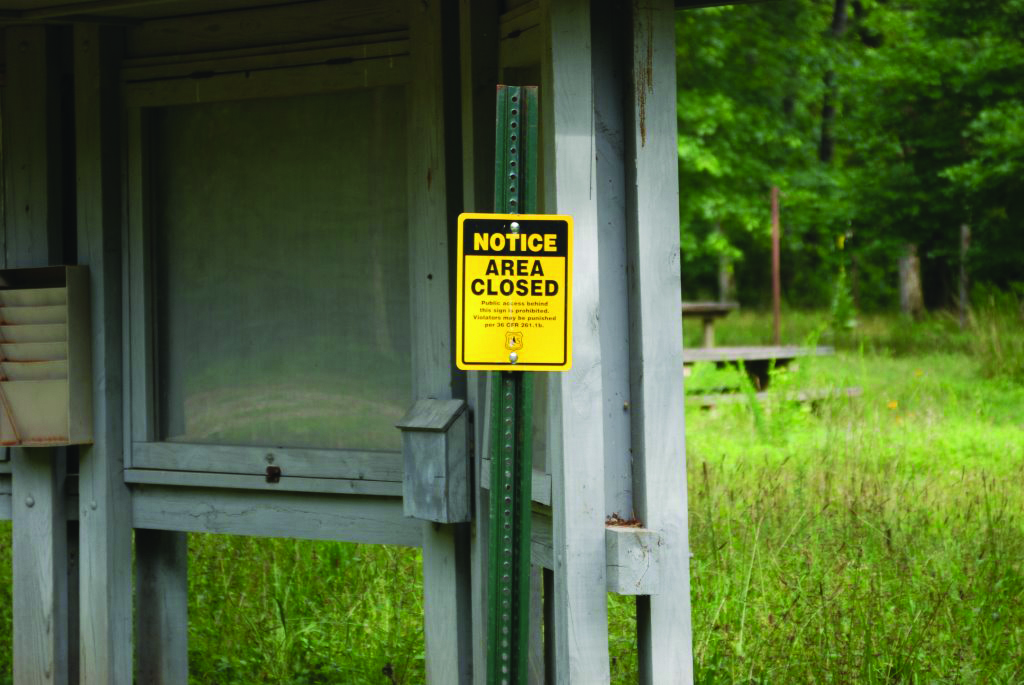 DERWOOD BRETT
Two years after the initial closing of Big Brushy Recreation Area, located west of Oden alongside U.S. Highway 270, the once popular site remains closed. Previously, representatives of the U.S. Forest Service (USFS) stated that the area would be reopened for day use.
A major flash flood swept through Big Brushy Campground on May 31, 2013, damaging tent pads, picnic grills, playground equipment, parking spurs and roads. No one was in the recreation area at the time of the flash flood.
Area hikers, bikers and campers met with USFS District Ranger Tim Oosterhous in September, 2013 following the ranger’s comments that he intended to close the facility and remove all remaining equipment. Oosterhous had earlier stated that he planned to totally remove the camp ground, picnic tables, fire pits and bathroom facilities to allow the land to revert to it natural state.
After the 2013 meeting, Oosterhous issued a draft decision notice and final environmental assessment concerning the future of recreation at Big Brushy Campground. Oosterhous said he had identified the Day Use Only option as the alternative he intended to select.
“We initially proposed to close Big Brushy,” said Oosterhous. “But after giving careful thought to comments from the public and our partners, I’ve decided to keep the campground open for day use,” he said.
However, even with the USFS statement that they planned to re-open the area, it remains closed and unavailable for use by the public at this time. Telephone messages seeking comment from the Mena District Ranger were not returned.
Citing concerns about potential flooding, Ouachita National Forest managers previously closed the campground to overnight use in the summer of 2012. A formal flood elevation survey illustrated that the entire campground lies below the 100-year flood elevation, with the majority of the area lying below the 50-year flood elevation, according to a USFS survey.
There is a 1 in 100 (1%) chance that a 100-year flood will occur in any given year; similarly, there is a 2% chance that a 50-year flood will occur in a given year, according to a statement issued by USFS.
“Safety is our number one concern here, so we really only had two choices,” Oosterhous said in an earlier statement. “We could close the recreation area completely, remove everything and let it return to general forest area, or we could open the area to the public during daylight hours, when people are awake and more aware of their surroundings. We’ve opted for the latter, knowing how much this area means to the public and the local community.
Under the USFS plan three of the nine camping sites located nearest the water would be decommissioned, however at this time the entire area is unavailable for use.