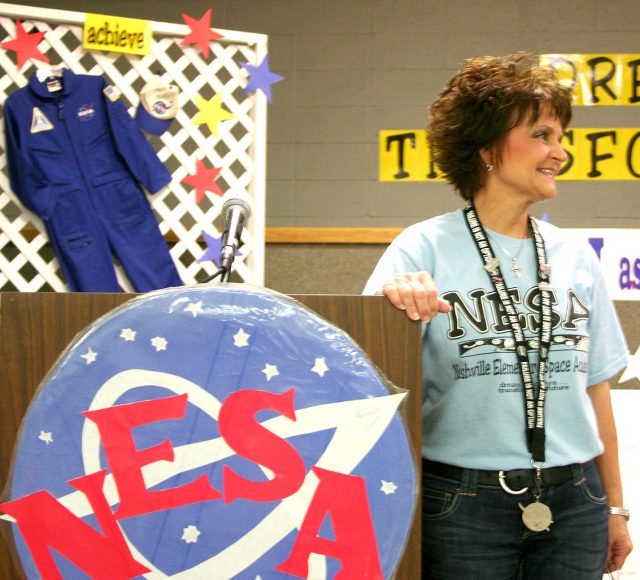 As students in the fifth grade march in to the soundtrack of “Star Wars”, Becky Floyd began to introduce her seventh class of fifth grade science students. The ceremony was  to honor students that completed all the requirements for the Nashville Elementary Space Program or “NESA,” as Floyd calls it.

“Kids like something that is a big deal, and I got to go to NASA with a science consortium with a group of teachers, so I thought that I’d just do a little NASA thing to teach them about space,” Floyd said.

Floyd, who teaches science and social studies at Nashville Elementary School, has been teaching about space through the program for the last six years. Previous to fifth grade, Floyd taught fourth grade science. But where she spent most of her time in the Nashville school system, milk cartons ruled the day.

“I taught kindergarten for 21 years and it was all hands on,” Floyd said. “I just like to watch kids learn.”

Floyd will retire this week after 38 years in education, all of them in the Nashville School District.

For an accounting major who spent her first few years out of college working as a teller at a bank, Floyd had a change of heart when she and her husband decided to move back to Nashville, where they both grew up.

“I listened to God and I called my parents and said I wanted to be a teacher and they said go for it,” Floyd said. “Dwight Jones, who had been my superintendent when I was in school, called and said that they were going to have to add another kindergarten teacher and that if I could get my hours for that, then the job was mine.”

So Floyd worked with Harding University, where she received her initial degree, to earn her teaching certificate that allowed her to teach K-6 grades.

“When I walked into Nashville Primary School, I was a scared, barely 21-year old. I was going to sit and I was going to learn. And I learned from some of the most wonderful teachers,” Floyd said.

Where Floyd strives in the educational system is in science, where she has spent a majority of her time.

“I’m a science teacher,” Floyd said. “If I was just teaching social studies, I’m sure I would become passionate about that too. But I am a science teacher because it’s just one of those things that so many kids dread because their parents say it’s shared and I want them to walk out saying it’s fun. We want kids to grow up and be engineers.”

When people think about Floyd and her classes, what usually comes to mind is her ability to make science practical. Her class centers around hands-on activities that help the students learn.

“I try to do things that are fun but yet is really deep learning. When I start off, I do this musical molecules,” Floyd said. “We play like we are hydrogens and oxygens and I have music going and when the music stops, two hydrogens have to find an oxygen and they bond and that’s kind of the beginning of that cycle of teaching that I do.”

When asked about test scores and standardized testing in Arkansas, Floyd said that while comparison is needed to be made, sometimes the test isn’t an accurate reflection of the student.

“I watch it day in and day out for years. Kids come to school with different things on their minds. If the day before they are taking the test, Mom and Dad had a big fight or maybe they didn’t have food to eat or a bed to sleep in, that’s what is important to them at the moment, not the test,” Floyd said. “These kids learn so much and I know that they do, it’s just that sometimes they have trouble following a certain format.”

Even though Floyd is quick to tell of her passion to teach, she says that it requires a special person to be teacher.

“Teaching is definitely a calling,” Floyd said. “And ultimately, I just want to watch kids learn. That’s what I’ve always wanted to do.”

So for a teacher that was the first of her family to graduate from college, Becky Floyd has big plans after her retirement this week.

“I’ve thought of consulting, I’ve thought of lobbying. Maybe I’ll start a support group for Hispanics in this area, because there’s not one and that’s weighing on me,” Floyd said. “I’m not going to sit at home. There’s too much in me. I cannot imagine my life without a group of kids around. But I know the world is out there waiting on me.”