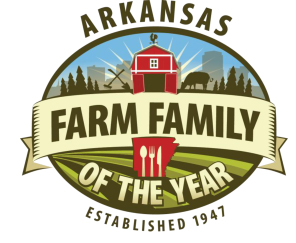 entatives of Pike County Farm Bureau and the University of Arkansas Division of Agriculture Extension and Research Service are pleased to announce the Stewart family of Kirby has been chosen 2015 Pike County’s Farm Family of the year.
The organizations are chief sponsors of the program in Pike County.
Bruce and Paulette Stewart have been raising cattle and producing hay for 28 years. Bruce came from a farm family and was encouraged by his Uncle Charles Stewart, who sold him his first 40 acres of their operation.
Their farm is known as the Circle “S” Farm today and they have added land as it became available to them. All three of their sons have contributed over the years.
One son, Wade, is now a full-time employee with barn management and hay in the summer and daily maintenance.
As the Pike County Farm Family of the Year, the Stewart family will join 74 other county farm families in vying for district and state recognition as the Arkansas Farm Family of the Year.
The Arkansas Farm Family of the Year will be announced in December at a banquet at the Wyndham Riverfront in North Little Rock.
First established in 1947, Arkansas’ Farm Family of the Year program is the longest running effort of its kind in the nation. The program sponsors are Arkansas Farm Bureau, Farm Credit Services of Western Arkansas, Farm Credit Midsouth, ACA AgHeritage Farm Credit Services and the Electric Cooperatives of Arkansas, with the cooperation of the program partners Arkansas Press Association, University of Arkansas Cooperative Extension Service, the U.S. Department of Agriculture Farm Service Agency, USDA Rural Development, the USDA Natural Resource Conservation Service, Arkansas Department of Workforce Education and the Arkansas Agriculture Department.
Much more feature coverage on the family will featured in an edition of the Glenwood Herald later this month.