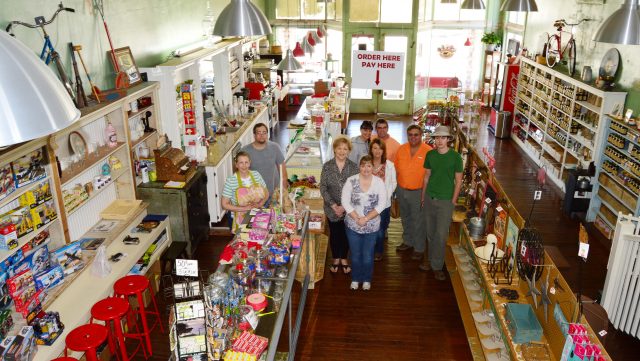 Hawkins Variety Store has been selected as the Murfreesboro Chamber of Commerce’s Business of the Month. Pictured during an open house on Friday, May 22 was (left of counter) employee Beth Gilbertson and owner DeWayne Gray (not pictured is Francy Gray) along with MCC Secretary Jane Fugitt, MCC member Penny Lamb, Pike County Clerk Sandy Campbell, MCC member Jack Bond and MCC Treasurer Tim Smith. In the back are town visitors Mandy and David Wallen from Clearwater, Fla.

The following is an article published in the Nov. 19, 2014 issue of The Nashville Leader about the restoration of the historic business:

DeWayne Gray is standing in the middle of Hawkins Variety Store thinking about the local legend who is credited with finding the first Murfreesboro diamonds in 1906. “It’s really quite amazing when you stop and think about it.”

Huddleston’s glittering find set off a “diamond rush” and subsequent construction boom in the Pike County town. By the summer of 1909, the Owens-Stelle Building was completed on the corner of the Murfreesboro town square. The building has housed Hawkins Variety Store since 1943, operated then by Buel Hawkins’ parents. Buel and his bride, Sarah, took over the business when he returned from the war in 1945 and ran the business until the Hawkins leased the building and the Hawkins brand to Gray – with an option to buy. (Gray also owns the connecting Stelle portion of the building, which now houses Southern Specialties Fine Jewelry, as well as the old Hawkins furniture store, also nearby on the square.)

“There is a lot of history on this corner,” Gray said back in early October as he and his wife, Francy, worked late into the night toward a November reopening date.

The store was officially opened to customers Monday, Nov. 17, 2014 putting an “old but new” spin on the business that clings in many memories and the local history books.

DeWayne, 48, has always known Hawkins. His mother used to take him there as a kid to buy school supplies, and of course, sodas and candy. The business was always a town hub where one could pay electric and gas bills and even use the Western Union.

“It had everything back then,” he recalled.

Long ago, Buel Hawkins adopted the store’s longstanding slogan, which was written across the top of the building: “We have almost everything…if you will help us find it.” The slogan may be gone from the building front, but it still applies to DeWayne and Francy’s plans and is featured prominently on the store’s T-shirts.

“We’re trying to bring back the old Hawkins memories and memorabilia,” DeWayne said of the decision to undertake a major restoration of the building. “I’ve always loved this old building and I could see the potential and historic value of the building.”

DeWayne and Francy briefly stepped away from Hawkins when they leased the building and the Hawkins brand to Chris and Theresa Sharp. The Sharps operated the business with a more modern approach until Theresa lost a short battle with cancer. The Grays took back over in April of 2014 and have been deep in restoration ever since.

“Hawkins is an institution and a destination,” DeWayne said. “We want to keep it that way.”

The store has likely seen just as many visitors as the Crater of Diamonds State Park. Back in the day, Buel Hawkins had the walls lined with license plates from all 50 states and postcards from around the world. It was a tourist destination but also functioned to serve the townspeople.

“Our idea is to create a real working store, like an old general store, but avoid becoming a tourist trap,” said DeWayne, who again used the phrase “old but new.”

The “new” Hawkins now offers Blue Bell ice cream, a soda fountain, specialty food and sandwiches, and gourmet Columbian coffee, but also has a “kitchen corner” with houseware and cast iron items as well as a toy section like the “old” Hawkins. A loft area has also been renovated and Francy has plans to offer the space for events. There will also be a bridal registry.

In the front corner, the old Coca-Cola machine Buel himself installed years ago still offers a cold “little bottle of Coke” to visitors. “That’s even part of the history,” DeWayne said of the vintage vending machine.

DeWayne has always had an eye for history. At 18 years old, he became the youngest member to ever serve on the Southwest Arkansas Regional Archives, an organization dedicated to collecting and preserving the state’s heritage and history. He was also the first president of the Pike County Archives and History Society, which he helped found in 1986.

“I’ve always been fascinated with the historical aspect of things,” DeWayne said. “I’m a big fan of historic restoration.”

There is plenty of historic aspects for DeWayne and Francy at Hawkins Variety Store. Before the building became the store’s home, it was the home of the Whitten Drugstore, and later the Oscar Baber Drugstore. The back four rooms of the building also once housed the office of Dr. W.D. Alford. There was a coal-fired water heater, hand pumps for the water and a well that was uncovered in 2011 when the back area’s floors were replaced. There was even a room likely used for surgery, well lit by sunlight from high windows that also offered some privacy.

While working to restore a glass door in the back portion of the building where Buel’s office used to be, DeWayne was scratching away several coats of paint when he noticed some words underneath. Like an archeologist discovering an ancient fossil, DeWayne slowly discovered the words “Dr. Alford. Office” on the glass.

“More history,” DeWayne said as he smiled and pointed the door face he could have easily rushed right through and effectively erased some history. Above the doors in the back portion of the building are hinged transoms that were used for ventilation.

DeWayne and Francy have also chosen to bring a part of Buel’s history to the forefront. Tucked away back in Buel’s old office space was a massive safe, which DeWayne said dates back to the early 1900s. The safe, which is still functional, was so huge that when it was rolled into view out by the main counter, it’s wheels left a indention track in the store’s wooden floors. The plan is a for a minor restoration, but not too much.

“It was hidden away but it needed to be up here where everyone can see it,” DeWayne said.

The Grays have attempted to keep everything as it was originally – from door knobs and latches, to the pine floors, to the cracks in the fading green paint on the walls, which have been sealed in time.

“We’re trying to leave everything old, but clean,” DeWayne said with a laugh. “Keep the history, but keep it clean.”

A portion of the original windows installed in 1909 still let the sunlight in the front of the building despite being covered for decades with what DeWayne later discovered was “horse hoof glue.” He has spent many hours standing high above on a ladder removing the glue, and he is still not finished.

“That about killed me,” he said.

The restoration of Hawkins Variety Store is an ongoing process and DeWayne and Francy are not sure when it will ever be complete. They know history can sometimes be a slow process.

“It’s our passion and we want to make sure it’s done right,” DeWayne said.