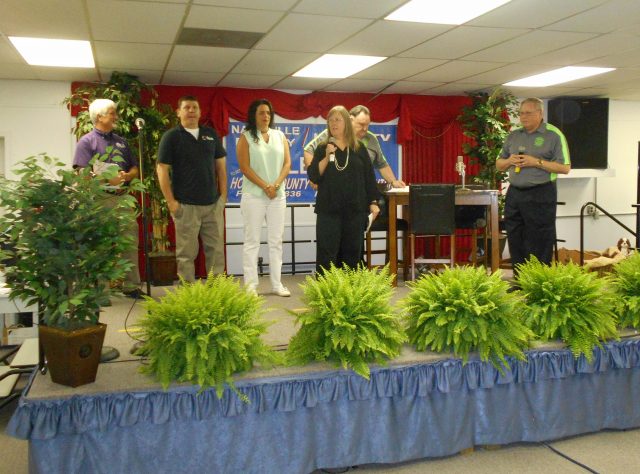 At the junction of opportunity and need, some benevolent South Carolina business owners have stepped forward to make the largest gift in the 41-year history of the Howard County Children’s Center.

HCCC administrator Tim Freel was still incredulous this week over the gift of vitally-placed 23.7 acres of land which will eventually be home to a new pre-school replacing the center’s burdened and aging pre-school facility.

The gift from Sun Solutions, Inc., owners Andy and Kathi Cook, and Philip Morris, was announced from the stage and on television and radio, Wednesday night, at the start of the annual Rotary Club Telethon to benefit the center.

And the gift is an outgrowth of a friendship between Freel and the South Carolina residents whose Sun business has many wide-spread operations — like at Nashville where user manuals are produced for Husqvarna products.

They met when Freel tried to negotiate an easement across their property across from Howard Memorial Hospital on the bypass. The HCCC administrator hoped to build a road across the property. The road would cross Coleman Creek and go onto the HCCC campus where the new pre-school would be built. In fact, the stated aim of the 2015 Rotary Telethon was to raise money which would be used as matching funds for a bridge across Coleman Creek.

The Cooks recently visited Nashville to see their operation, and Freel gave them a tour of the Children’s Center.

By coincidence, the Cooks have a Down’s Syndrome son and they were impressed with the scope of HCCC.

So impressed that when Freel pressed them for a price for the easement land, Andy Cook said they’d decided just give the land to the center — all of the land. A gift.

At the telethon, Wednesday, a trio from Sun announced the presentation. The spokesperson was Vicki Whitehead, chief operating officer, accompanied by Wendy Essick, director of operations, both of Columbia, SC, and Bobby Wilkerson, a 1989 NHS grad who is the division manager for Arkansas. Wilkerson manages the Nashville operation.

After the onstage announcement,  Whitehead spoke to “The Leader” and said that the Cooks were “just totally blown away” by their tour of the center. She described the Cooks and Morris as persons who tried to give back to the community and who had a tender spot for efforts to serve developmentally disabled persons.

The 2015 Rotary Telethon drew pledges of almost $51,000. The center has a track record of a 99% collection rate on the pledges. The event was telecast on KNVL community and religious television station, and on “Ed 88” the campus FM radio station of Cossatot Community College-University of Arkansas. Masters of ceremonies for the telethon were Rotarians Jimmy Dale and Donny Woods, both also serving on the HCCC board of directors, and Loren Hinton, director of the college broadcast sequence. There were interviews with HCCC clients, parents of clients, and parents of children who attend the pre-school.

HCCC is in its 41st year. In addition to the pre-school, where developmentally disabled and normally developed children learn and play together, the center has life skills classes and a sheltered workshop for adult clients. Many clients also live in HCCC residence projects. Some clients earn a living working in the recycling project which has been hailed as a model for recycling tin, paper, plastic and cardboard. Recycling of clothing items is due to begin soon.