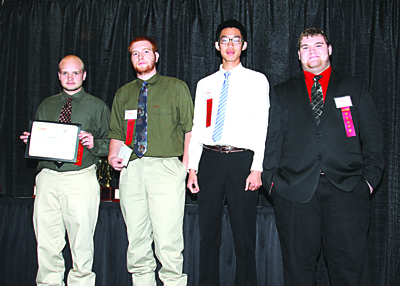 Participation in the Stock Market game amongst Dierks High School students is not uncommon, but for Finance instructor Crystal Smith, this year’s placement was significant since it is her first year heading the project after the retirment of former teacher Larry Jones.
“I am really proud of them, and I hope they learned something from their participation,” Smith stated. “I hope they can go on to use the skills they were taught in the future.”
Because Smith had a conflicting event the day of the luncheon, the students were escorted by Jones.
The team that placed was not originally in the lead, according to Smith.
“They may not have lead from the beginning, but slowly made progress and ended up passing the team in the lead,” she explained.
Though only the top two teams from each region are honored, Smith had three groups place in the top five.
Smith’s teams, which were made up of seniors, learned about stocks and investing throughout the semester-long project and were allowed to apply their knowlege to the Stock Market Game, which allows students to invest in real stocks without the risk.
“They learn how to invest in real life and if they make a bad investment, they see how it can hurt them later on,” said Smith. “They learn the need to research companies and get to practice using someone else’s money.”
Throughout the game, teams of one to five students attempt to expand a $100,000 stock portfolio over the course of 10 weeks in the fall and spring. They compete in either the elementary, junior high or senior high division in one of the state’s six regions connected to a university economics center area, stated a press release from Economics Arkansas.
Instructors teach their students research techniques and to become aware of current events that affect the market. The teams within each region and divison with the highest total equity at the end of each semester are recognized at the luncheon in Little Rock.
Annual participation averages more than 9,000 students, according to Economics Arkansas, making this year’s participation an increase of nearly 10 percent.