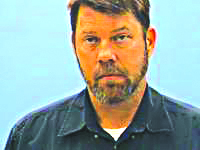 NASHVILLE – An Oklahoma man working locally was arrested Monday and his wife Wednesday in connection with allegations of permitting abuse of a minor.

According to a statement issued by Sheriff Bryan McJunkins, 44 year old Thad Keith was taken into custody late Monday evening as the result of an investigation that began in July of 2013, when emergency medical services transported a “small child” from a residence on Dogwood Circle to Arkansas Children’s Hospital with head injuries.
“Keith was a guardian/caretaker of the minor child along with his wife, Danita, at the time the child was injured,” McJunkins said in the prepared statement issued to local media Tuesday. “Investigator David Shelton investigated the case and obtained the warrant for Keith’s arrest.”
Danita Keith, Thad Keith’s wife was reported by police sources to still be in Oklahoma at the time of his arrest. She was placed under arrest by city police in Broken Bow on a warrant for the charge in Howard County Tuesday afternoon, and subsequently transported to Nashville by Howard County officials on Wednesday.
The couple were released Wednesday evening on a bond of $25,000 each.