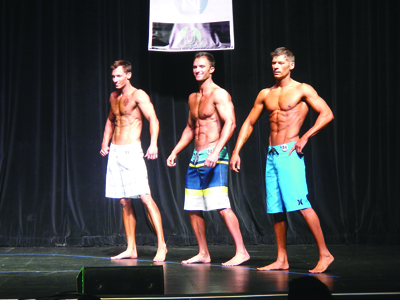 Weighing in at 157 pounds, Curtis Schade took second place in the ‘true novice’ division of the contest – a category reserved for those competing for the first time – and fourth in the open men’s division. Schade said he faced about nine total competitors during the meet, and wasn’t particularly surprised by the outcome reached by a panel of seven judges.
“It was about what I expected for both of them. I really didn’t have much expectation because high expectations lead to big letdowns,” he said Sunday during a brief telephone interview. “One judge told me I looked good, my shape was good, my posing was good – the only thing I need is more muscle.”
Schade has little time to follow up on that advice as he prepares for yet another competition in Little Rock, this one scheduled for August. He said he plans to use the intermission to gain as much muscle as possible while maintaining his single-digit body fat percentage.
“My plan between now and then is, I’ll change my diet and my workout routine a little bit to build more muscle, but I do plan on doing at least one more dry run,” he said.
Although he is already looking forward to his next turn on stage, Schade said Saturday’s inaugural performance wasn’t without its share of nervous anxiety, something he expressed concerns about in an interview prior to the competition.
“The serious nervousness didn’t really set in until we were waking out the door Friday morning, but it really, really kicked in when we were already backstage and they called our names to line us up – not really staged to go out, but pre-staged I guess,” he explained. “I could see some of the other guys out there doing their poses and I could see some of the audience, and that’s when I started getting nervous. But as soon as I stepped out in front of the lights, it was like, ‘Oh, this isn’t too bad.’”
Further easing Schade’s concerns was the backstage fraternity among the competitors, something the US Army veteran said he didn’t necessarily expect to find in that environment.
“I was backstage doing some pumping up and some posing in front of the mirrors and I even had one of the guys I was competing with who says, ‘Hey, spread your lats out a little bit more,’” he recalled. “It’s a blast. Even though you’re in there competing with these other guys, there’s a strange sense of camaraderie that I never knew existed.”
Until he can return to the company of his flexing brethren, Schade will be quietly preparing to defeat them at Nashville’s Flex Gym.