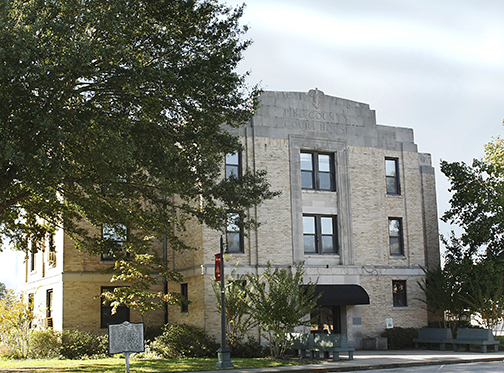 The appropriated money will be taken from funds that the county received after the construction of the jail. The new Detention Facility was planned during former Sheriff Jerry Jones’ administration and completed after former Sheriff Preston “Pep” Glenn was elected to office in 2009.

Pike County quickly filed a lawsuit in November 2011 after the completion of the facility in against architect Wade Abernathy, et al, which included Abernathy and all of the contractors due to shoddy workmanship and unresolved construction issues. The Pike County Quorum Court gave previous County Judge Don Baker approval to settle the lawsuit on May 19, 2014. The county was awarded $428,237 in net funds from the suit, with a total recovery of $987,500 after all inspections, attorney’s fees and court costs.

Pike County Sheriff Charlie Caldwell addressed the court about the current problems at the facility. The two issues he cited are major concern for safety factors for both inmates and employees inside the facility, and will provide evidence if needed and possibly prevent any future lawsuits. The Sheriff’s Office settled a federal lawsuit March 31, 2015 in the amount of $19,500. The suit was originally filed in 2011 under previous Sheriff Glenn’s administration.

The case began when previous female inmate, Tina Morgan, alleged her civil rights had been violated multiple times by two jailers, Paul Cowart and Kenny White, and the 309-program inmates that were housed in the facility and that she had reported the incidents to Sheriff Glenn numerous times and nothing was done. She cited sexual misconduct and mistreatment by both jailers and the inmates serving in the program.

Morgan was moved to another facility and ADC Act-309 Program Director Bill Terry began an internal investigation within the Detention Center that uncovered several infractions.

The first issue Sheriff Caldwell addressed was the intercom system within the facility. He said that the intercom system is only “half way working half of the time” and that some of the intercoms in the inmate’s cells do not work at all. Caldwell said that he had made attempts to speak with the company that originally installed the system, but that they will not talk to his office due to the lawsuit. “None of the people that worked out there during the construction of the jail will talk to us,” said Caldwell.

Caldwell said he had received a bid for $18,000 from a company called MTS to fix the entire intercom system. JP Ricky Buck asked Sheriff Caldwell if a clause could be put in the company’s contract that they guarantee the system to be fixed and that the company would honor its work. Sheriff Caldwell agreed that this could be done.

The second major issue that Sheriff Caldwell mentioned was that part of the camera system is down within the facility. When the jail was being built it was thought by the county that all of the newest equipment was being utilized in its construction, but it has since been found out that the camera system that was installed was already three years outdated at the completion of the facility.

JP Ed Jones asked Sheriff Caldwell if the camera system covers all the “hidden” spots at the facility. Sheriff Caldwell said that not all of the spots are currently monitored, but the plan is to install additional cameras that will have improved audio recording as well.

In addition to the blind spots he said that there is currently no surveillance on the front, back or side of the facility and there is a suicide holding cell without a camera. JP Buck asked about the warranty on the system and Sheriff Caldwell said that he warranty was only good for a year.

Sheriff Caldwell told the court that the current camera system does not include infrared, and that the video does not produce quality visual if any when it is dark. This technology that comes with the updated system will. He said this addition to the system is vital to monitor the inmates at night because “that’s when we a lot of problems happen”.

The cost to cover all of the needs of the upgraded camera system is approximately $89,000.

“It’s because of how it was built and it wasn’t right when it was put in,” said JP Johnny Plyler.

JP Verl Stovall assured Sheriff Caldwell that the court realized that the Sheriff’s Office’s needs were due to the poor construction of the jail and that unfortunately it was a mess he had stepped into when he took office in 2013.

JP Plyler asked if the proposed appropriation of $107,000 would leave enough money in the lawsuit money fund to repair the roof and was told yes. He made the motion to appropriate the needed funds and told the court, “Remember if we ever have to build another one, we don’t have to take the lowest bidder.”

Judge Mack said he had been given permission to destroy the medical records that had been left behind and that he wanted the building to start being cleaned, inventoried and organized immediately.

It was mentioned that the Arkansas Department of Health in Pike County was interested in some of the supplies that had been left behind that Home Health or Hospice could use.

Judge Mack and Pike County Clerk Sandy Campbell spoke to the auditors and were told that everything within the facility had to be auctioned except for the x-ray film. The film can be sold and Judge Mack was given a list of ten different companies that purchase it to contact.

Clerk Campbell said that there are a lot of items in the building and that the county needs to have someone come look and help give a general idea of what all is there and its possible value.

Judge Mack told the court that the facility was still in decent shape and that the generator is working. “There’s not a lot to be redone. We don’t know what we want to do with the facility, but we have some ideas,” said Judge Mack.

Judge Mack said after the building was clean he wanted to hold a special meeting for the court to tour the facility and then present some ideas about what to do with the property. “Maybe hold some town hall meeting and see what the people of Pike County want to do with it. It will never be a hospital again,” said Judge Mack. He said that ultimately the decision about the property would be up to the court, but that he wanted their decision to be helped with citizen input.

JP Plyler was the elected delegate to attend the State Quorum Court Association meeting. He said that there would be various changes in the state beginning next year that will have to be considered into the county’s proposed budget for 2016. He said the issue that could possibly become a “big deal” in the near future is Act 693.

He explained that under this act volunteer fire departments can gather enough signatures on a petition in their district and file it with their county clerk to require all taxpayers of the district to pay a fire tax instead of voluntary dues. The tax would be added on to property taxes.

JP Plyler said that the program had nothing to do with the Quorum Court, but that the members would be blamed by the taxpayers and it would create extra work for county offices. He said that if petitions were filed and the revenues were collected it would probably be a good thing for the volunteer fire departments to help cover their expenses, but that “We (the court) didn’t do it, they did it and its another thing we get to administrate,” said JP Plyler.

JP Jones asked what happened when fire districts crossed county lines and Clerk Campbell explained that the boundary lines are already created and it would be handled such as school zones. If the citizen within the zone lives in another county, that county collects the tax and sends the revenue to Pike County. She said that if the volunteer fire departments did file the petitions it would create more work for the Tax Collector’s Office than anyone else.

JP Plyler also gave a detailed account of new legislation and its effect on Pike County.

The court approved the appropriation of various funds including the $107,000 to the Sheriff’s Office and a check for $3,000 that was received by the county from Jordan Physical Therapy Unit, the last owners of the former Pike County Hospital. Clerk Campbell said that the company had been trying to settle using health equipment and that Judge Mack had talked them out of that.

The county had received their Legislative Audit report and Judge Mack said that the only infraction was that there were not enough segregated duties, and that this is due to simply a lack of employees.

Clerk Campbell said that the county gets cited for this infraction every year and it is nothing major. She said that when dealing with funds the state would like one individual to receive the funds, one to deposit the funds and one to reconcile the bank statement, but that the county simply does not have enough employees.

JP Plyler asked if the county was going to turn in, lease or buy the four road graders the Road Department currently uses. The court had allowed previous Judge Baker to trade in the machinery that the county owned on a lease agreement for a 3-year contract for four new Catepillar road graders. The equity from the property the company owned was used to help pay for the lease agreement on the new equipment.

After much discussion amongst the court about whether the county could pay out on the machinery or the company would buy them back JP John Terrell suggested that the court look at a copy of the contract. He said that he believed it was a “set” contract with the company.

Judge Mack explained that everything will depend on equity. He said that the previous equity from prior equipment will be gone and that all four graders may can be leased for $1,900 a month or possibly each could be bought for $1,900, he did not know, that it would all depend on appraisal and equity value.

After the reading of the Treasurer’s Report, JP Jones asked Judge Mack if he planned to build or work on any roads in the future. Judge Mack said that Strawberry Road is in very bad shape and the State Highway Department estimated it at a cost of $300,000.

Mack said the county is going to rip up the road and smooth it out for a year and then apply lime and then chip, seal and pack the road.

JP Stovall mentioned that Lodi Loop was in bad shape as well.