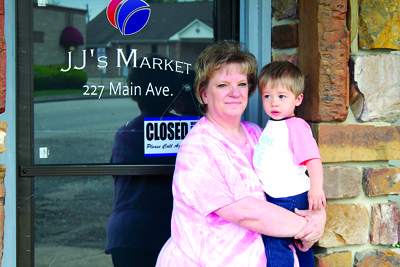 DIERKS – The much anticipated opening of JJ’s Market in Dierks will take place Monday morning at 9 a.m.
The market will be open Monday – Saturday from 9 a.m. – 7:30 p.m. and Sunday from 12 p.m. – 5 p.m. Its stock will include produce as well as canned goods, baking items, eggs, milk and other dairy products, chips and snacks. There will also be a deli located inside the store, which will serve fresh cut meat, deli sandwiches and meat and fruit trays.
Owner June Pinson originally planned to open business’s doors by Christmas, but delays in locating proper equipment, getting permits and having items delivered on time set the date back.

In a previous interview, Pinson stated that her goal was to help the community, rather than benefit herself.
She explained that members of Dierks and the surrounding area have been forced to drive to De Queen or Nashville to purchase fresh produce and meat since the closing of their original grocery store. JJ’s Market will eliminate the drive and allow money to be spent locally.
“This way the money is going to stay here in town. Not only that, but people are going to save money on gas since they won’t have to be driving as far,” Pinson said.
To further benefit the town’s economy, local restaurants Kenya’s and the Top of the Hill Drive-In will be purchasing most of their meat from JJ’s Market.
Since announcing her plans, Pinson has been flooded with positive feedback and public anticipation from the eager townspeople who are looking forward to having their groceries more readily-available.
“I’m grateful for all the interest in [my project] and for all the people who have stopped by and asked when the store is going to be ready. I couldn’t be more blessed,” Pinson expressed in a more recent interview.
Pinson was approached in August by her niece, Launa Pinson-Simmons, who expressed the area’s need for a supermarket. Since she was not employed elsewhere at the time, Pinson decided to take on the task and set to work assembling the needed funds and beginning the legal process to start her own business. She sought out prospective employees and traveled to other retailers to observe how they conducted their affairs.
Now, only days away from being able to observe the fruits of her labor, Pinson said that she equally nervous and excited.
“I’m scared to death,” she laughed. “But I’m also really happy. I’ve gotten lots of support from everyone in the community. I’m really looking forward to it.”
While the store will be officially open to customers Monday morning, the grand opening will be held Wednesday from 11 a.m. to 1 p.m.