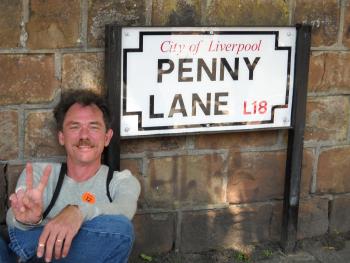 Mount Ida Middle School mourns the loss of one of their favorite teachers as they deal with the tragic death of teacher, B. Keith Franklin. According to Middle School Principal Donna Whisenhunt he brought history to life through a unique teaching style that incorporated props, costumes and music to bring the subject he loved so much to life. She, along with April Scurlock and Jill Thew, sat and reflected on the legacy that he leaves behind at Mount Ida Middle School. “He was so full of life and very animated,” Whisenhunt stated while describing the man whom she had worked with for over 10 years. He was known as “my favorite teacher” by every student that you talk to even though he expected the best from them. A poet who was best known for his work “I steal pencils”, he brought a storytellers mentality to the classroom. He often wore costumes that reflected the clothes of the era to help bring the history to life. In fact, he incorporated his love for music, traveling, and even stamps, into the classroom as he drew his students into the events they were studying. Scurlock, remembered how he would have his students pick cotton that she would bring from her father’s farm in eastern Arkansas. “He would hold the stalks and explain how to pick the cotton and remove the seeds from the boll.” She recalled. Thew remembered his love for music. She recalled how he would drive up every morning with music from his radio blasting. “He was like a teenager driving up to the school with his music blaring!” She explained. The trio expressed how the kids loved the music he would play in the class. He would play the music and then explain the lyrics and how they fit into the historical events that they were studying. Although he was loved for what he did to bring history to life, he was also remembered for the things outside his teaching regiment. Whisenhunt recalled that the students remembered him by his green thermos and his love for coffee. Thew joked that he was a coffee snob and always said he was going to start a coffee company when he retired. He also closed out every school year by taking to the halls on the last day and at the sound of the last bell he would turn cartwheels down the hall. He presented each student with a four leaf clover picked from a clover patch in his yard. “He would pick them, press them, dry them, and put them in clear tape,” Whisenhunt explained as she talked about the clover. She shared a story of a mother whom she had spoken to Monday. The mother showed her son’s four leaf clover to Whisenhunt and wanted her to know that her son carried it in his wallet to this day. Whisenhunt stated that Franklin didn’t think this student liked him and she wished he could have heard that. The only thing that seemed to rival his love for history was his love for poetry. Everyone knew that he didn’t grade on Wednesday nights, but few knew why. Franklin would make his way to the Poet’s Loft in Hot Springs on Wednesday nights and participate in poetry readings. It was on such a night that his most famous poem, “I Steal Pencils”, was created. Unfortunately, it was not the only secret he kept hidden from his friends and students at Mount Ida. According to his wife Karen, he battled depression for many years. Whisenhunt shared that his wife wanted the students to know the importance of getting help if they too struggle with mental struggles or anquish. Franklin lost his battle with depression April 11. His family wanted a teaching moment to be conveyed through this loss. Communication. Talk to someone, let them know how you’re feeling. Whisenhunt shared in a letter to parents, “ I have conveyed these statements to the students and that we may never know the struggles of a person; may we as a people always be caught filling the buckets of others and communicating.” She urges anyone that is struggling with mental anquish to talk to someone. There is help out there and you need to let someone know you you feel. The trio acknowledged that they had known Franklin for several years and never knew of his inner battle. The students have responded in ways that would make him proud. The seventh and eighth grade students were taking pages from old history books and writing their favorite Franklin moment on them. They plan to make a book from the pages to give to his family. The fifth and sixth graders are writing their favorite memories down to be placed on a quilt for his family. One of the greatest legacies may come from a running joke within his class. He would always joke with kids that asked if they could leave the class. He would tell them, “I will cost you a dollar.” Many of the students want to give a dollar to purchase poetry books for the school library. The Magical History Tour that was Mr. Franklin’s class continues in the hearts and minds of all he passed through his class. His family asks that instead of sending flowers, to please make donations to the following: To Write Love On Her Arms at www.twloha.com, an organization dedicated to raising funds to combat mental illness.