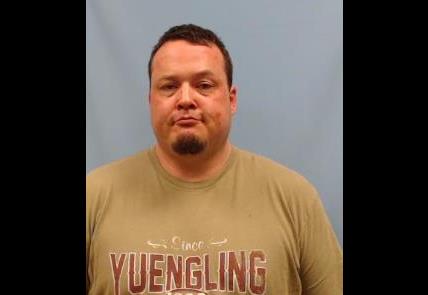 The quest began when Howard County Deputies received information that Jewell was located at a residence in Howard County and attempted to locate and apprehend him on the outstanding warrant.

Jewell departed the location just prior to officer’s arrival and a manhunt for his apprehension ensued. The pursuit of Jewell eventually ended in Sevier County where Arkansas State Police apprehended him, however, prior to the apprehension a Sevier County Deputy wrecked his vehicle and was injured.

On March 30, the Pike County Sheriff’s Department received a 9-1-1 call., in which the caller advised of some gunshots and screaming kids with a woman yelling.

The caller advised the house where the incidence was accuring was located at 5811 Hwy 70 West in Newhope, the Jewell residence. Pike County Chief Deputy David Shelby and Deputies Shaun Furr and George Donaldson responded to the call.

According to police reports, when the deputies arrived on the scene, they spoke with Amy Jewell. Amy stated that her husband (Jewell) came home from work around 8:30 p.m., that he ate supper then walked through the house with a bag of clothes. Amy added that she asked Jewell if he was leaving and he replied he was, and she refused to help locate items that he asked for.

She further stated that after a few minutes she went outside and got into Jewell’s “Demo” truck and locked the doors, at which time Jewell came outside and told her to get out of the truck or he would call the cops.

According to the report, Jewell then acted like he was going to bust out the window with a beer bottle, so she then drove the truck to the front of the house, and upon arrival, Jewell was standing by the window with his Glock pistol pointing toward the ground with the laser on.

Amy allegedly asked Jewell if he was going to kill her with the gun in the front yard with all of the kids in the house, at which time Jewell supposedly unloaded around four rounds into the air.

Amy said that Jewell then shoved the gun into the side of her head and pulled her out of the truck by her hair and shoved her to the ground. After sitting in her Tahoe and spending time with  her cousin in the carport, Amy supposedly told her cousin that she should call the cops, at which time Jewell came through the door and grabbed her by the hair and stated “I dare you”. Amy then left with Jewell.

While this incident was being investigated, Amy showed deputies where the altercation took place and four .40 caliber shell casings were located in the front yard of the residence.

When this altercation took place, seven children and Amy’s cousin were inside the residence.

A search for Jewell in several counties eventually led to his vehicle being identified along Highway 71 in Sevier County, according to police sources. Jewell, in the vehicle, allegedly then led members of local law enforcement as well as the Arkansas State Police on a chase through Sevier County which ended in a wreck between De Queen and Gillham.

In connection with the chase and wreck, another vehicle was struck by a Sevier County sheriff’s department cruiser. A female victim of the crash was reportedly transported to a Texarkana area hospital for treatment of injuries sustained in the accident, though her name and condition have not been released, nor has the name of the deputy driving the police vehicle which collided with her vehicle.