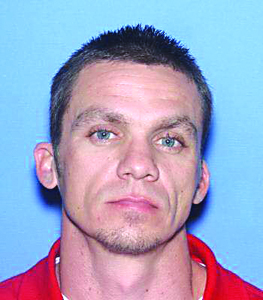 PINE BLUFF – The man identified by police as having been involved in a break-in and theft at Dierks schools was arrested Thursday in Pine Bluff, according to statements made by the U.S. Marshals Service.
James Brandon Alsup, 37, whose address is reported as various different Arkansas cities depending on source, was arrested shortly before 4 p.m. Thursday afternoon at a carwash in Pine Bluff. Alsup had been identified as the suspect in the break-ins in Dierks after review of surveillance video from a local convenience store reportedly showed Alsup and a vehicle he had allegedly stolen in northeast Arkansas.

According to Deputy Marshal Kevin Sanders, the Eastern Arkansas Fugitive Recovery Taskforce, headed by the Marshals Service and jointly participated in by Arkansas State Police, the Arkansas Department of Correction and Arkansas Department of Community Correction, was contacted by a confidential informant with news of Alsup’s location, and tracked him to Pine Bluff, where he had been living with a woman.
The fugitive recovery taskforce was active in the case partially because of Alsup’s status as a parolee, having been released on parole from Arkansas prisons only last November after serving multiple years on theft charges. He has been in prison multiple times since 1996, according to prison records.
The taskforce reportedly found Alsup while driving, but because of Alsup’s history of leading police on chases, allowed him to continue to his destination before attempting to apprehend him. Upon arrest, Alsup allegedly led police to the flat-bed pickup reported seen in Dierks.
Sanders confirmed that Alsup faces charges in Craighead, Green and Mississippi Counties in connection with the theft of a Chevy Impala, break-ins at Green County Tech in Paragould, leading police on a brief chase while fleeing near Manila, stealing a tractor trailer in Osceola where he reportedly abandoned the stolen Impala (leaving his wallet with identification in the car) and break-ins at Buffalo Island Central Schools in Monette where he also allegedly stole the silver flatbed Ford F-350 and left the tractor trailer before coming to Dierks.
Additionally, he is the subject of multiple warrants from Jefferson County, but Sanders was unable to list the offenses Alsup may have committed while in Pine Bluff.
According to Dierks police, the break-ins at Joann Walters Elementary School and Dierks High School resulted in an approximated $2,500 worth of damage, though the only items noted as stolen were a small amount of cash from vending machines in the high school.
Dierks police chief Brian White stated that his department had not interviewed Alsup as of Friday afternoon, and that he expects that investigators from other counties will be given priority in conducting interrogations.