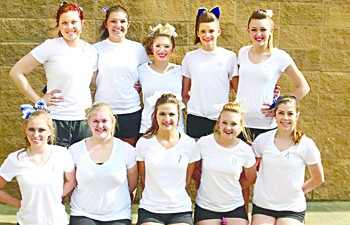 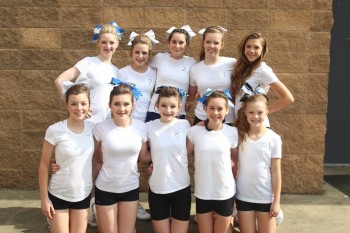 DIERKS – Junior and senior high cheerleaders were chosen Friday afternoon at Dierks High School. Tryouts began at 1 p.m. and the results were posted about three hours later, much to the anticipation of contestants and parents alike.

For the 2015-2016 school year, junior high members of the squad includes Perri Lowery, Halle Mounts, Delaney Eckert, Gracie Thomas, Gabby Strasner, Kaylynn Hill, Kyra Helms, Abigail Garner, Macy Eckert and Karson Young. The senior high group is comprised of Katelynd Fennell, Charlotte Cothren, Alyssa Gibson, Khylla Hill, Carli Davis, Crystal Webb, Isabel Fox, Destiny Nutt, Alyssa Ward and Grace Martin. The mascot for the year is Katie House.
Most of the members of each division have been cheerleaders in the past.
Junior cheerleader Helms has been one for three years. She described her feeling of being allowed to continue the sport as “ecstatic.”
“I look forward to working with the new and old girls on my squad and cheering on the Outlaws on the victory,” she stated.
Helms explained that she wanted to make the team to feel the rush that cheering gives her.
“I tried out and I still get the same thrill that I got from the very first day. I wanted to represent my school and be a proud member of the squad,” she said.
Helms went on to note that cheer is not as simple as it may seem. Like many of the other girls, she worked continuously to reach her goal.
“The only time for relaxing is after I made it,” Helms noted.
Lowery is another member of the junior high squad that has three years of experience. She has dreamed of cheering on the Outlaws from a young age, but said it was her friends that really inspired her to tryout.
Lowery practiced daily, practicing at home and spending time at the gym learning how to tumble, jump, dance and chant.
She expressed her excitement about having a place in the group, saying, “I am looking forward to getting to do lots of different dances and cheers and hopefully getting someone to smile when I do my weird facials,” she joked.
Garner, who is in her second year of cheer, also commented on the amount of work that cheer requires, which is often a detail dismissed by onlookers.
“I practiced every day and dedicated myself to cheer. You have to do whatever it take to make it and to be an amazing cheerleader,” she explained. “To prepare for tryouts, I spent hours studying dances and working on motions, tumble skills and jumps. Cheer may not seem like a sport to most, but in my book it’s much harder and takes much more time than most other sports.”
Garner remarked that though she was happy about making the team, she feels bad for those she will not be sharing the floor with at pep rallies or the half time field with at football games.
The junior high cheerleaders have a number of role models they can look up to, found on the senior high team.
Fennell has been picked each year for the five years that she has tried out, and said that she is both happy to have made it this year and relieved that tryouts are over.
“I like being part of the squad and love the girls that I get to cheer with. I am looking forward to cheering on the Outlaws my last year of being a cheerleader!” she said.
Ward has also been a cheerleader for five years.
“Making the squad again is a true honor. I couldn’t have done this without the help of my friends and family to motivate me to be the best I can,” stated Ward, who has been interested in cheerleading since she was a little girl.
“I used to watch my brother play football and I would just sit and watch the “big girls” cheer and I told myself I would be that girl one day,” she said.
Since then, Ward said she has been devoted to the team and dedicated herself to improve anything and everything possible.
Cothren did not find success every time she tried out. She did not make the cut last year, but refused to give up. She stayed motivated and worked hard, earning a place this year. She said that she wants to be a positive role model for the younger girls to look up to this year.
“I’m excited and relieved tryouts are over. Now for the fun part,” she expressed.